Written on a cramped airplane where I couldn’t see what I wrote. Done in about 20 minutes. I thought it was a pretty awesome deal. Including pictures of Guatemala in this, though the actual Guatemala post will come later.

The old man of the village stood on his porch, watching the children kick the ball along the slanted, concrete road. It wasn’t used so much as a road, but a field for the kids, and now and again a path for the people of the village. Once he watched an ambulance carefully pull in to remove a man suffering from heart problems. Unfortunately, as much good as the old man was, he was no doctor and could do nothing to help. 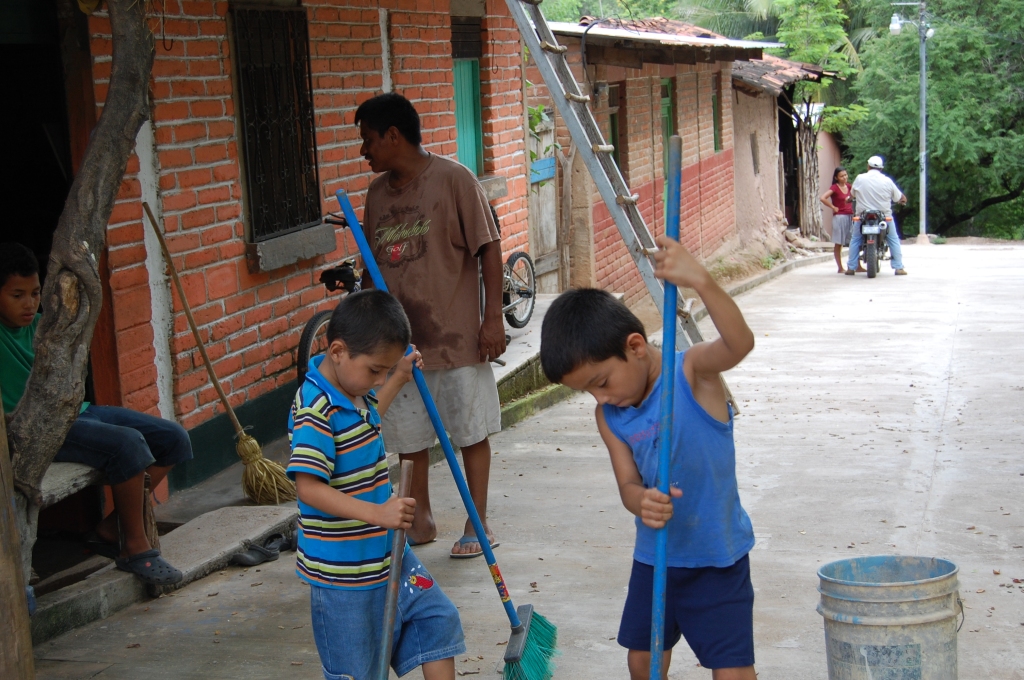 The clouds were dark in the sky, threatening rain, but he did not flinch from it. It was the summer season, and rain would always hit at two. Sometimes it was quarter after two, or quarter to two, but it always happened near two, at times with lightning and at times without. The rain brought cold relief to the otherwise hot and humid air which clung to his body and clothes.

The boy had dark skin and onyx hair. His teeth were yellow with dots of black, a sad epidemic. Some families would use the toothbrushes and toothpaste. This child’s, along with many others, obviously did not. Hedr nodded, “Yes, I believe I could tell the children a story today. Go gather them.”

“Just me. No one else.” There was a strange defiance in the boy’s eyes.

“I do not work for but one boy. I work for the good of all.” Hedr winked at the child, and the boy huffed and darted off, shouting out in his native tongue for the other kids to congregate at the old man’s abode.

It was a simple house made of cinder blocks. He remembered building it near half a century ago. The concrete was poured out as a powder, turned into a cake with sand, then the center was depressed, as if creating a gravy bowl out of mashed potatoes on Thanksgiving. Water was pooled into the depression, caught from the regular rains of the past few days, and then they took shovels and heaped the concrete in upon itself, one scoop after another until the water was surrounded, a juicy inside hidden by an outer shell.

Then it was churned and more rocks were added, small pebbles, nothing too large. At times, when Hedr would aid, the shell punctured at the incorrect time, and water flowed freely. The men shouted at him in a tongue he didn’t understand in his youth, and they hurried to keep the flood from getting too far out.

It was like that for several days as they created mortar for the cement blocks and concrete for the floor in much the same manner. The electrical was simple enough, and finally he had a house, with a metal roof and concrete walls. It wasn’t beautiful, but it was home.

The village was run down, with roads once paved by well-meaning people, but the inability to maintain meant now they were hazards to running children. Donkeys and horses relieved themselves as they pleased. Some of the drunk men did the same.

However, there still was a beauty to the land. Large mountains surrounded the small town of nearly two hundred souls. Trees covered the distance in a deep green, always healthy and vibrant. In winter, when he was used to freezing, it simply rained more. The animals of the land had vivid colors striping through furs and feathers to blend in with the lively flora. It was breathtaking, and one of the reasons Hedr never left when he first came to visit.

The children gathered around, near three dozen, sitting on the broken, slanted pavement. They all looked up expectantly, their dark eyes wide. Each of them wore some shirt from another country, shirts discarded by societies of excess. Many of the slogans, logos, and advertisements were at least a decade old, though still Hedr knew none of them. They were too recent, and he was too removed from his old life.

The first child to visit shouted, “Tell us story, Mr. Hedr. Teach us about you.” The English was broken, but he worked hard to teach them at the school. “Where is wife?”

Hedr laughed. It was a story asked for often by the children, then by their children’s children, and finally by this third generation. “That is a good question.” He sat down, the joints in his knees becoming sore and a tinge of pain shooting through his left arm when he used it for support. It was about to rain.

“This is an old story, no doubt one your grandparents remember.” Many of the grandparents had passed on, but a few, generally toothless and barely able to leave cots, still persevered.

“There was a woman, long ago, and I loved her with all I was, all I would be, and all I am. She was my closest friend, my confidante, and the only person I trusted. I was not perfect, by no means, but I strove to be what she required.”

There was a tingling in his chest, by his heart. It was a wound which healed long ago, going from a painful ache to a pleasant throb. Now, for whatever reason, it hurt again and he rubbed his shoulder and chest for solace. “I gave my all to her. I gave my virtue to her and took hers.” The boys started to giggle, nudging each other, while the girls looked to the side or the ground, dark cheeks turning ruddy. Hedr smirked, remembering his youthfulness, the vigor of the moment. “It wasn’t our plan. We wanted to be married. We wanted to do it right and remain pure for each other in our wedding bed.”

He sighed, looking to the sky. Rain was already starting to drop, dotting the pavement and the shirts of the children. “It’s not so easy, sometimes. You get lost in her eyes, in her arms, in her body, and soon you’ve done something you cannot retreat from. You give something you can never reclaim.”

Another child shouted, “But what happened? You married her?”

That ache resurfaced, and he cursed his old age. He could feel it as stiffness in his shoulder, tingling in his arm, pain in his elbow. He shrugged and thought it was nothing more than the rain, the changing humidity aggravating old, imagined wounds upon his soul. “No. She did not love me as I loved her. There were secrets she kept to herself, and soon after we became one flesh, she found another man.” There was still bitterness in his voice. He could hear it, but could not stop it even now. There were horrible things he wished to say, but it would not help and it would not spread his message of love. The jealousy, the hatred, the bitterness she infused him with…. He clenched his old hands until the knuckles were white and sore, his jaw shuddering. He always hoped the next time he told the story the feelings would be muted.

“She found another man, and her life went on. She was happy, and did not need me.”

He was able to smile. To think back to those times when he first arrived in the foreign land. “I was married to her, and this would not change. In my soul I had already bound myself tightly to a woman and no other would do. I dated. I tried to find another partner. I found them all lacking what she gave me, and I would not settle for what was in front of me.”

The rain was coming down harder, and the children scooted closer to the entrance of the home, forcing Hedr back a few paces. They mostly fit under the yawning. “Then I came here. I helped your great grandparents, and even their parents and grandparents. I fell in love, but not with a woman. I fell in love with this town and its people.”

He stood, shaking as he got up. Pain shot from his elbow, through his shoulder, and into his chest. He grimaced. “You see, I was not meant for one woman. I was not meant to have one child. I was meant to have hundreds. My family was to be an entire village. My life was meant to be given to many instead of one. That is the story of why I am not married, as I am married to this place, and no woman could ever replace this village.” Or her, he thought, tears forming in his eyes. It was impossible to tell if the tears were that of memory or pain. He went out into the street, hobbling through the crowd of children, letting the rain batter his body, washing away the memories.

“I am tired. You children should go home now. Go to your parents and tell them you love them.” Sharp pain went through his shoulder. He dropped to his knee, struggling for breath as his chest tightened. He collapsed and another ambulance had to brave the broken pavement of the village.

← Hawkhurst: Alys
Tomb Raider and the Quest for Gender Equality →

6 Comments on “Remembering a Foreign Time”